The second season of “Nashville” has just finished and I think that this season was much more interesting that the first one. A lot of things happened during this year and four major characters were added to the series: Layla Grant (Aubrey Peeples), Zoey (Chaley Rose), Luke Wheeler (Will Chase) and Jeff Fordham (Oliver Hudson). This four characters were really good during this second season and one of my favourite was Jeff because he was really mean and he gained the role of the most hated during the series. By the way, Layla too was a good addition to the show because she played the role of the Juliette’s nemesis. 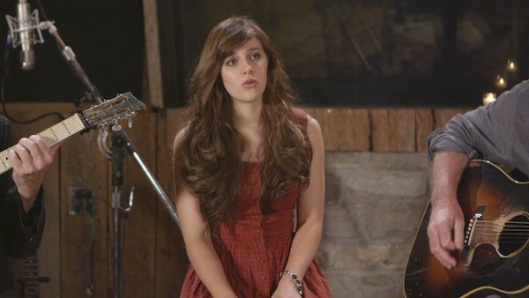 When I first saw Layla during the second season I thought she would be a useless characters but, with the development of the story, she gained much more relevance and she became a great character. In the first half of the season she was mean and she tried to destroy the life of Juliette but when she started to realize that she wasn’t very popular, her character became really interesting.

First of all her love story with Will is really ingenious because they both gain something about it. Will can hide his homosexuality and Layla can increase her popularity between the audience. The relationship started as a lie but, in the end, Layla fell in love with Will and I felt a little sorry for her. When they married I thought “Poor Layla!” because she really believed in the relationship.

When they started to record their reality show, that was the moment when I thought that the real identity of Will woul have been revealed. And I was right! In the season finale Will revealed his homosexuality to Layla and, in the meanwhile, a secret camera recorded the scene. What will happen next? I think that Layla continue to fake the relationship so she can increase her popularity and, maybe, she can exploit the situation in some ways. I think that the producers of the reality show will threaten Will.

By the way, this season finale was really good and I’m really interested to see what will happen in the third season. Hopefully it will be a complete season and not a mid-season, we will see what will ABC announce in the next weeks. In the meanwhile, let’s enjoy the best performance of Layla during “Nashville”.