How do you feel after last night Pretty Little Liars? I love this show but I always feel we will never know the truth. And for once I agree with Toby saying “there’s a lot that we don’t know”  even if said out of context.

Right now I’m convinced Ezra is not A but of course he is involved in this thing somehow. But would A got into Hanna’s house through the front door? I doubt so, I mean if he/she needed to get the diary he would have done as he always do, without anybody noticing. Dunno, I’m so confused. But what I know is that I cannot looking at Ezra wearing that stupid hat.

And come on Aria, please open your eyes. Another clue about Ezra being A or not, we see at the end, that Emily’s car system had been hacked but how could Ezra being doing so if he was digging at Hanna’s place and driving towards the cabin then? We have just two possibile answers: he is not A, and maybe he is working for A; he has a little helper.

I hope we’ll have answers soon and not just in the series finale, that as Marlene King said there will be a turning point for the series.

Now, I want you to pay attention to a page of Alison’s diary that Spencer was taking photo of “Hot for Teacher“. Is this about Ezra? That will explain why he wanted that badly. 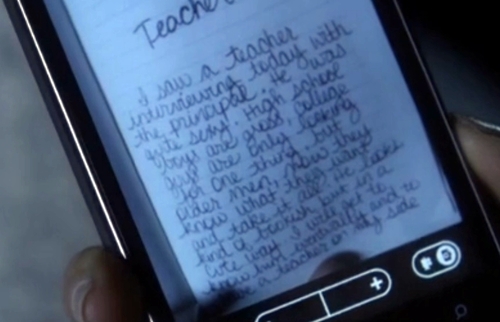 Please give me clues if you have any.